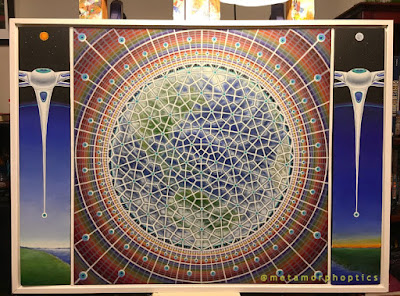 And biogeocoenosis is a word that means deep ecological association of life and the physical earth processes.

Basically it's like a future version of the internet where artificial intelligence has emerged and converged and become one with natures intelligence and created an "Earth mind" or "Gaian mind" that surrounds the planet as a live-able and alive geodesic stratosphere city exo-structure - that communicates with the biological and geological processes of Earth to self-engineer more earth like biosphere planets in space. The color spectrum represents the information storing as a kind of light grid around the planet - playing with the ideas of "Mother Nature as it's own technology" and "technology as it's own Mother Nature."

"Someone once said, 'plants invented animals to carry them around'. Well, I think, eh, you know, the Earth invented human beings to build machines, and those machines will be the consciousness of the Earth. Have you not noticed that these machines are made of the Earth? They are made of gold and silver and arsenic and copper and iridium. They are the stuff of the Earth, organized by primate fingers into more complex arrangements than the Earth could achieve through geological folding, glaciation, volcanism, and what have you. We do the fine-tuning, but the Earth is beginning to think."