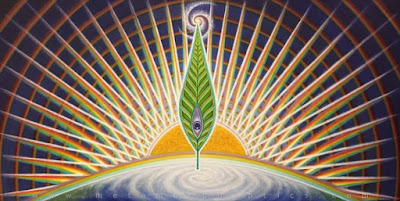 
"Instead of imposing our science upon life, we can find ways to let life guide the development of knowledge about ourselves." - Erich Jantsch

The leaf, as it exists in nature, is actually a solar technology that's beyond our limited concepts of technology and machine metaphors altogether ..

We are at an evolutionary crossroads for the future of human systems: between a dissociative technological prosthesis (transhumanism/material reductionism/centralized totalitarianism) or a unitive evolutionary transformation (spiritual renaissance/cultural design/decentralized self-governance).

What if the evolution of humans is a gestation process in the womb of Earth, that ends in the cosmic birth and biogenesis of Earth-like biospheres into space?

"The more hopeless our present situation seems, confronted by both ecologically unbalanced environments and psychological unbalanced minds, the more imperative it is not to lose hope.

"The aqueous and metamorphosing surfaces of this planet are also a technology, but a technology as elegant as the blood and bones of the human body, whose inner workings, so amazingly run, depend not at all on our conscious understanding. Thus there is a wisdom in nature, an elusive ecosophy that we can approach but never subsume." - Dorion Sagan

"Alienation from nature and the loss of the experience of being part of the living creation is the greatest tragedy of our materialistic era." - Dr. Albert Hofmann

"Clearly we have not only arrived at just another point in time of cultural change, but at a major mutation in the evolution of mankind." - Erich Jantsch

"Could it happen that life will grow in scope and power until it dominates the ecology of the universe as it today dominates the ecology of planet Earth? Could it happen that life will dominate the universe to such a degree as to achieve mastery over the geometry of space and time and create a habitat in which life can survive forever?" - Freeman Dyson

"It is impossible to conceive of another thousand years of human history. History then is ending. History is a kind of gestation process. It’s a kind of metamorphosis. It’s an episode in the life of a species." - Terence Mckenna

"Matter and the human body is the placenta of the soul and it is certainly true that the earth is the cradle of the human race, but no infant remains in the cradle forever." - Terence Mckenna

"Creating other living worlds is destined not only to enrich our science but to shift the whole foundations of our emerging planetary consciousness." - Dorion Sagan

Posted by James Moss at 6:24 PM No comments: