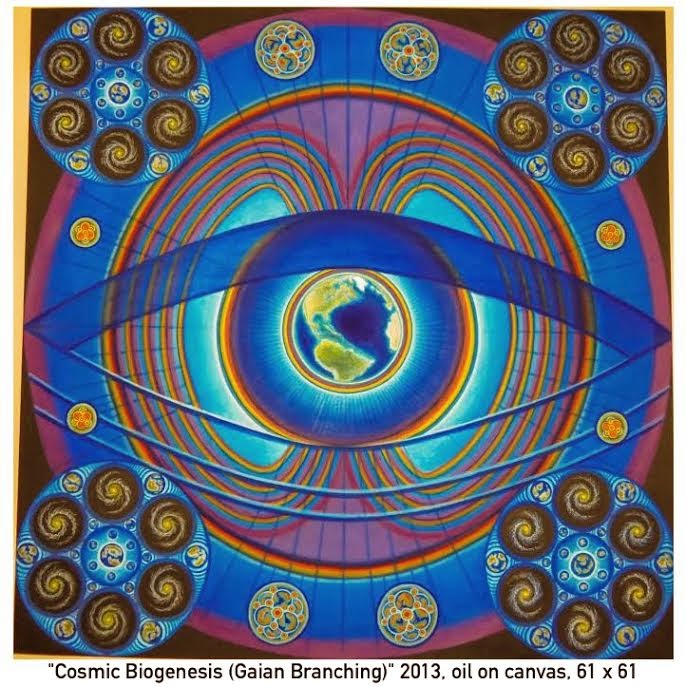 "Cosmic Biogenesis”
61" x 61"
Oil on canvas, 2013
...
"The aqueous and metamorphosing surfaces of this planet are also a technology, but a technology as elegant as the blood and bones of the human body, whose inner workings, so amazingly run, depend not at all on our conscious understanding. Thus there is a wisdom in nature, an elusive ecosophy that we can approach but never subsume." - Dorion Sagan 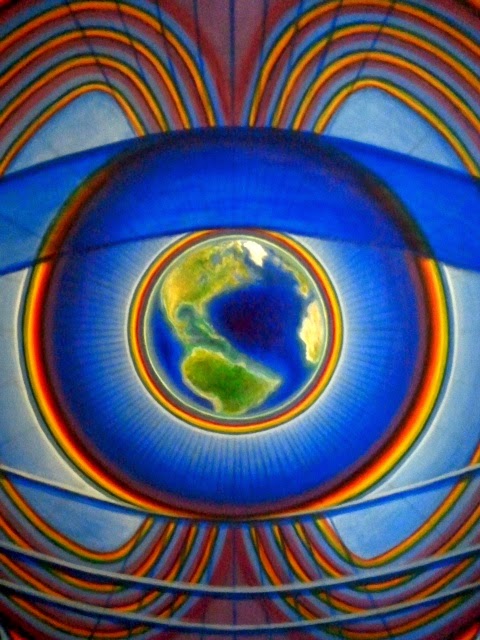 While I am trying to suggest self-organization and teleological attraction forces and a fractal and emergent mind-like property working in nature on multiple levels, and the overall unity associated with evolutionary complexity, I couldn't really yet see where a possible further evolutionary macro-scale continuation was going next over deep evolutionary time. While reading through some books on evolution I happened to be pulled, almost teleologically, toward a book called Biospheres: Metamorphosis of Planet Earth, by Dorion Sagan. In Biospheres Dorion proposed the possibility that the Earth, or Gaia, because it can be seen as a living self-sustaining self-organizing super-organism or meta-organism, that it could be on the verge of reproducing itself through the creation and dissemination of human mediated biospheres..


"Creating other living worlds is destined not only to enrich our science but to shift the whole foundations of our emerging planetary consciousness. As with one eye there is no perception of depth, so with one biosphere our view of the universe lacks depth.  A multiplicity of biospheres not only creates specific new angles of vision; it multiplies perspectives. It may also produce a whole new kind of vision, a sort of biological "hyperspective." The Earth becomes a cosmic eye without a body; with each new biosphere that is produced, this eye grows more compound, like the eye of an insect. Metaphorically, the compound eye of a biospheric Earth could come to see the entire universe as its exstensive body, a body whose parts are too heavy or distant to move. Speechless, we witness the endless pupal metamorphosis of our own body, powerless to do anything but watch." - Dorion Sagan

This quote above from Biospheres brings even deeper evolutionary meaning to the phrase for this project "meta-morph-optics" than I could have ever imagined. The composition for "Cosmic Biogenesis", directly inspired by that quote, with a cosmic Earth-Eye biospherically branching out and multiplying biospheres, allows the mind to contemplate the richer and realistic ecologically sensible, self sustaining, and integrated possibilities for continued space exploration as a whole-earth-species, not just as isolated humans, but as whole biospheres: organism and environment, ecologically self-contained self-regulating, human mediated, geothermal-biospheres, fractally birthing variations of the Earth. Eco-tech space ships, or as Dorion calls them "S.E.E.D.S." (Self-Enclosed-Ecologically-Designed-Systems) that severe the techno-reductionist rocket fuel ambilical cord to Mama Earth Sky!

Here are some other gems from this great book..


"The ancients looked up and saw in the night skies signs of a "large man." This was not just a passing metaphor but a whole microcosmic theory of correspondence between the little world of the human individual and the great one of the universe that encompassed him. Looking forward, it is possible to imagine a scenario in which the cosmos becomes animated in a way our intellectual forerunners and midnight star-gazers may never have imagined: if life continues to unfold "fractally" in the direction set down here--with individuality reestablishing itself at ever greater levels--biospheres will till the virgin soil of space itself, turning the cosmos into a cosmic garden, and a jungle. And yet that suggests the universe is already always undetached from you. Death becomes--death already always is--the illusion of life's absence. Our destiny is to traverse the universe--and that is exactly what were doing, right now."

"There is no history, evolutionary or otherwise, nor future, science fiction or otherwise, but only always the language-filled present. Linguistic convention creates the illusion of time's arrow; life is, before and all, (only) a sign. We are steeped in the medium we discuss."

"Because the biosphere has maintained itself in dynamic equilibrium for almost one-third the age of the universe, it is difficult to argue that it has just awoken (through the achievement of a critical living mass) from some inanimate slumber. Rather, it has been alive for eons."

"Propagule formation, the "seeding" of the biosphere prior to its dissemination, is as natural as a larval metamorphosis, the shedding of old parts in preparation for a new life. Language, technology, humanity, physicality, meaning--all of these are included latently and blatantly in the workings of the Earth, in the global regime. Each successful encapsulation of Earth life in the technological extrastructure of a biosphere represents an Earth "seed"--part of a pod-forming or blossoming process that is more central to life than are plants, fungi, or animals. By forming biospheres, Earth enters a stage of propagule formation preparatory to dissemination and cosmic metamorphosis. In such a dissemination and metamorphosis it becomes clear that technology was never anything but natural."

"Reproducing biospheres represent a new hour in the human day, a new age in the Earth's ontogeny. If we could examine history under the temporal equivalent of a microscope, we might be startled by the resemblance to organisms and cells of biospheres."


Other shots of this piece at various stages: 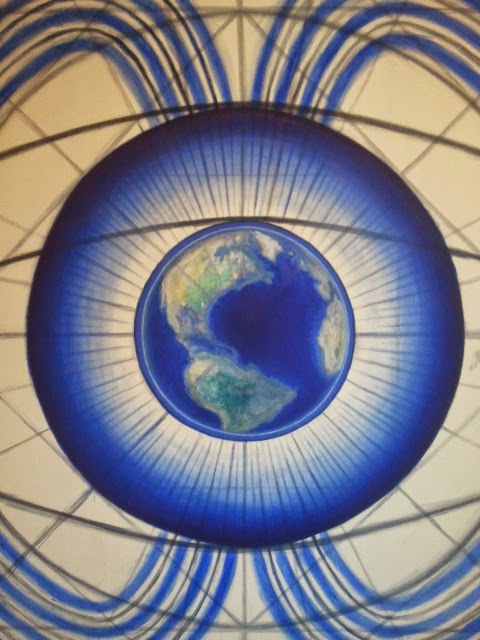 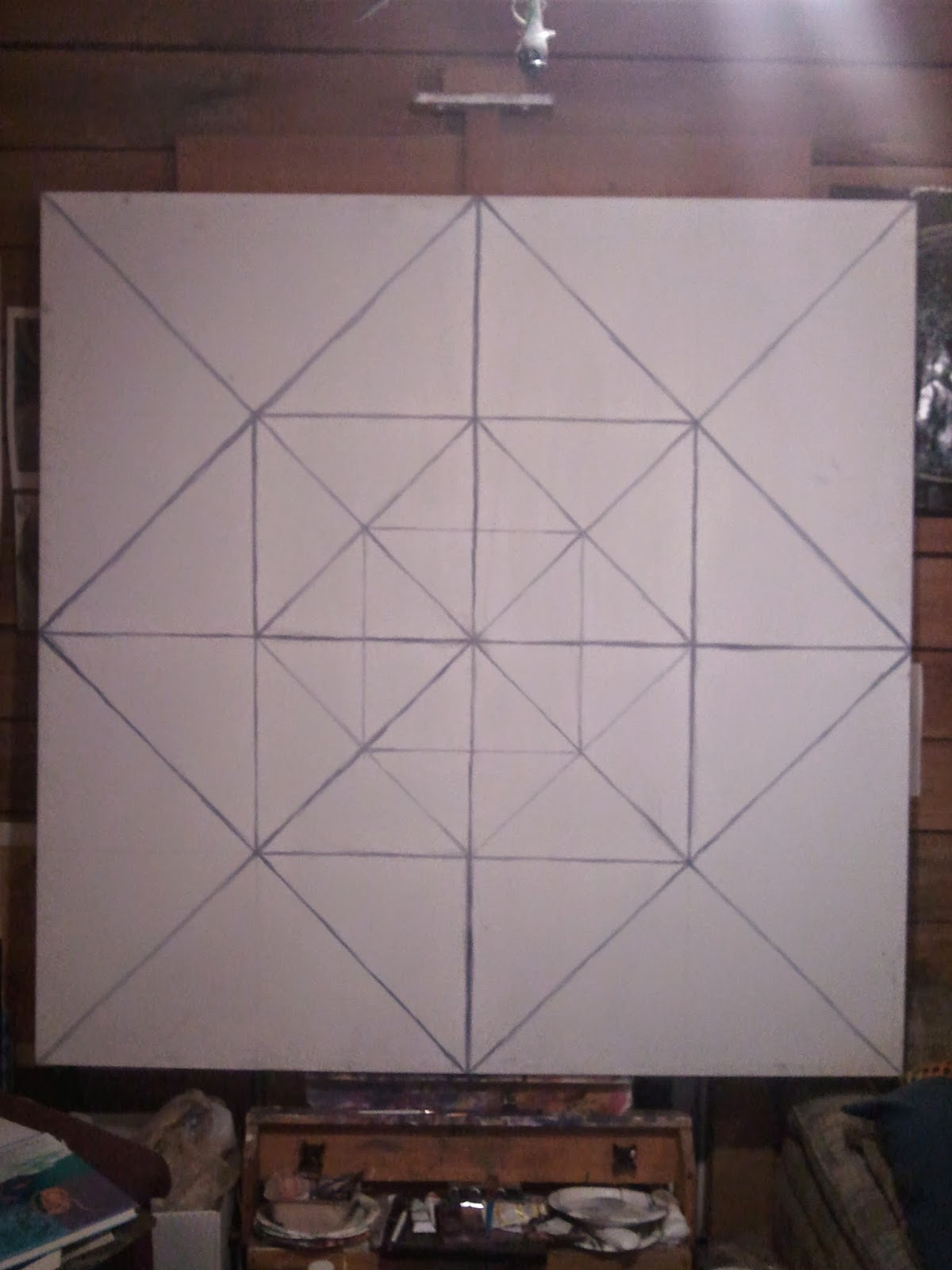 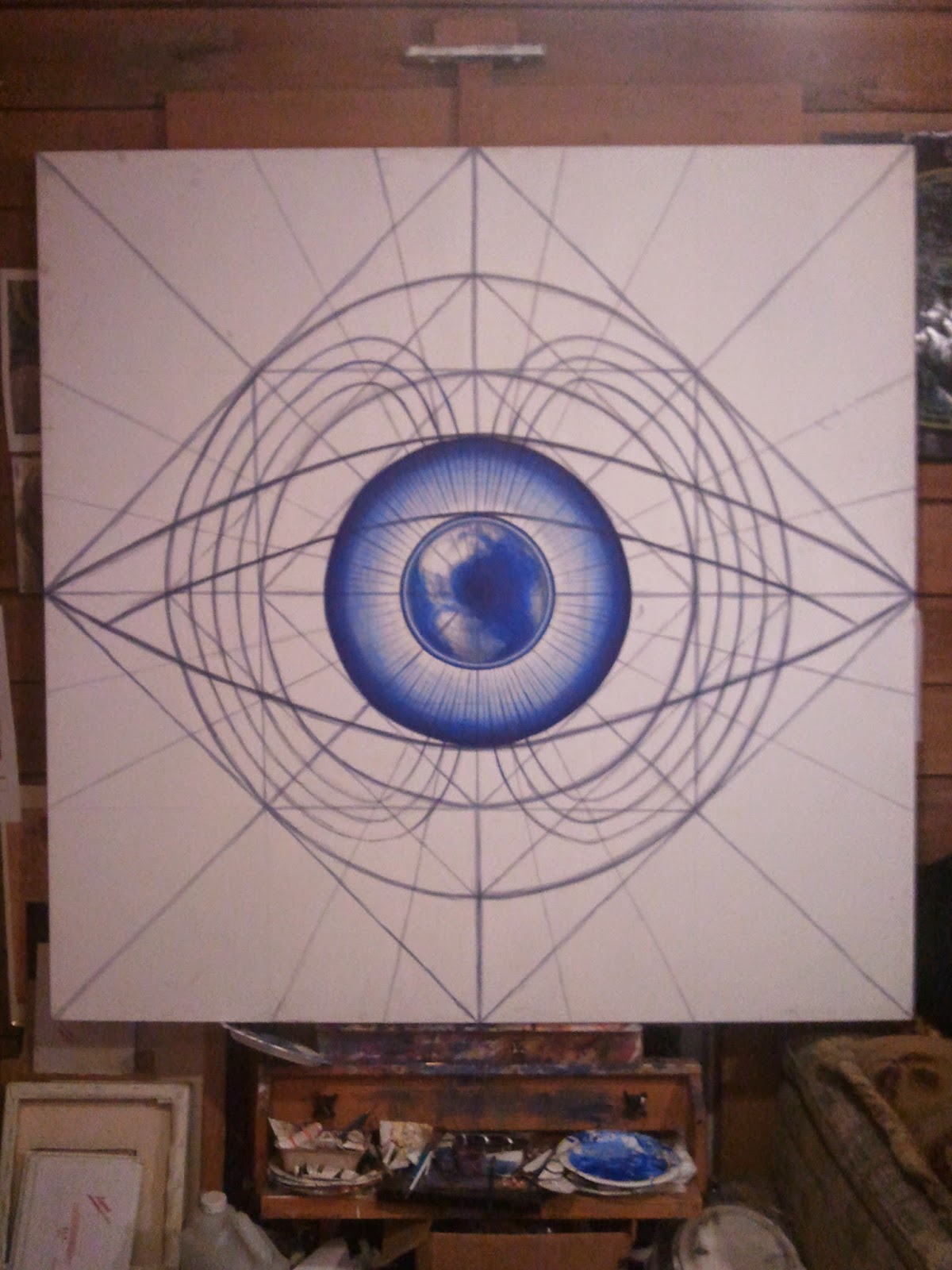 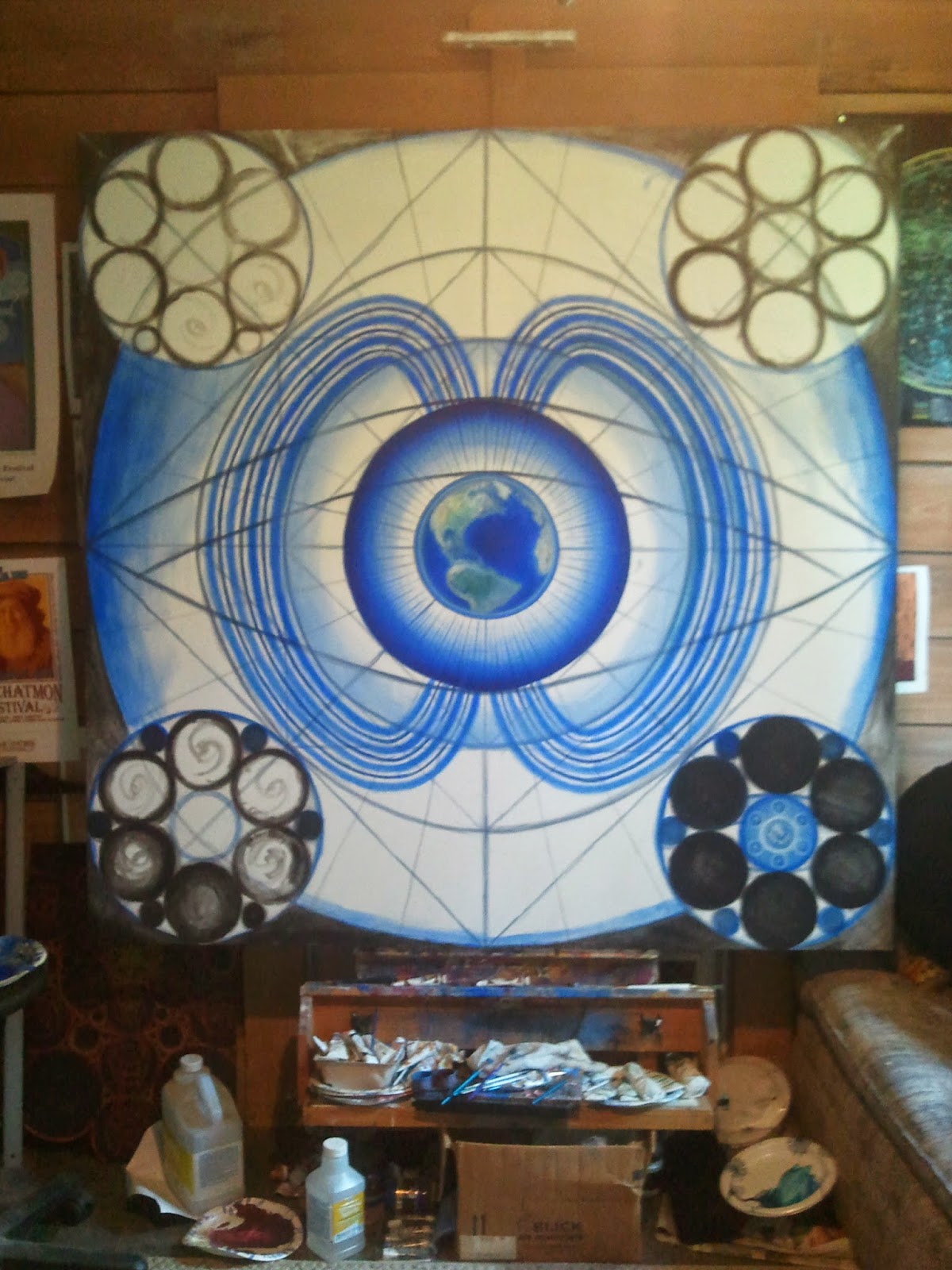 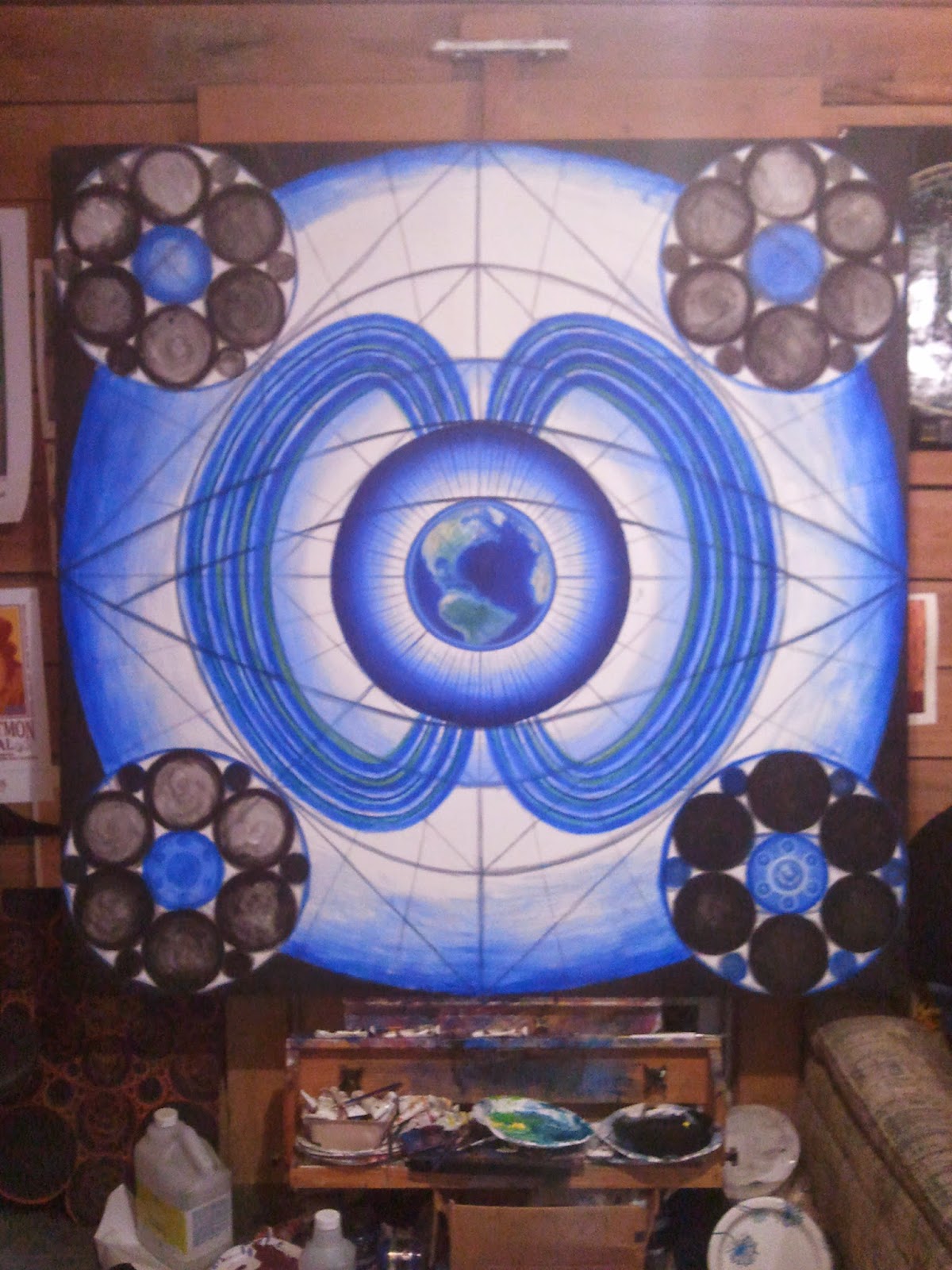 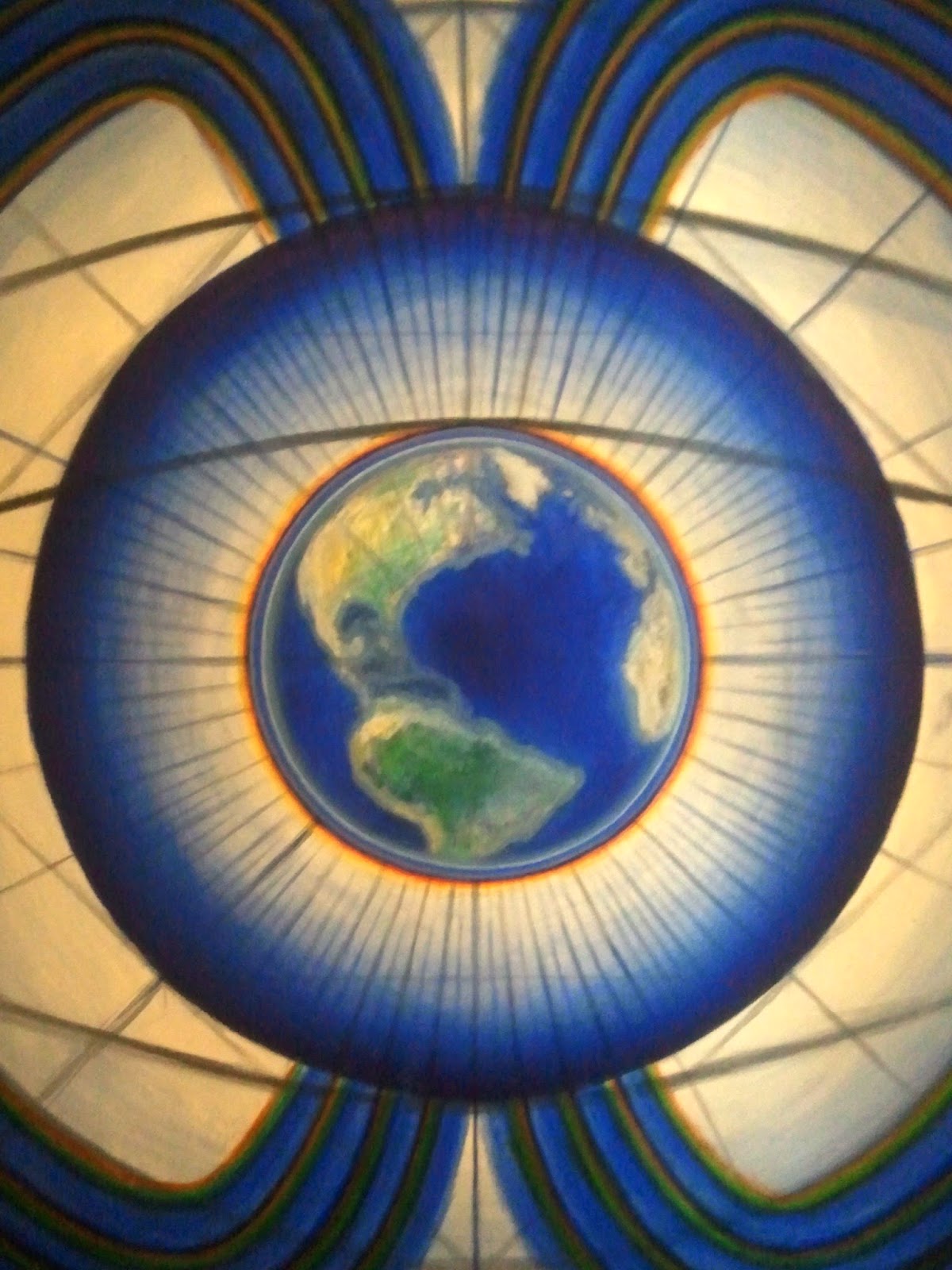 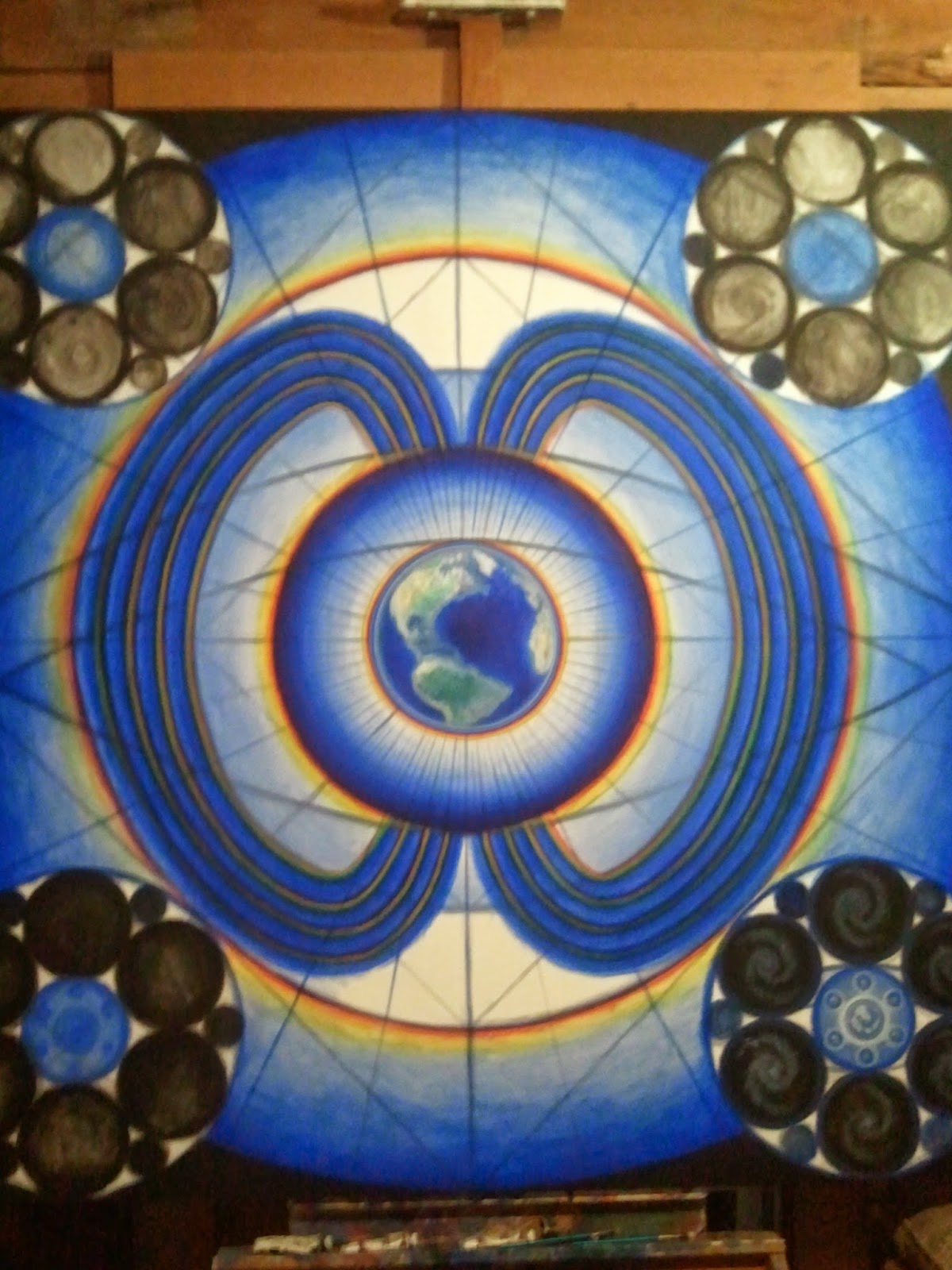 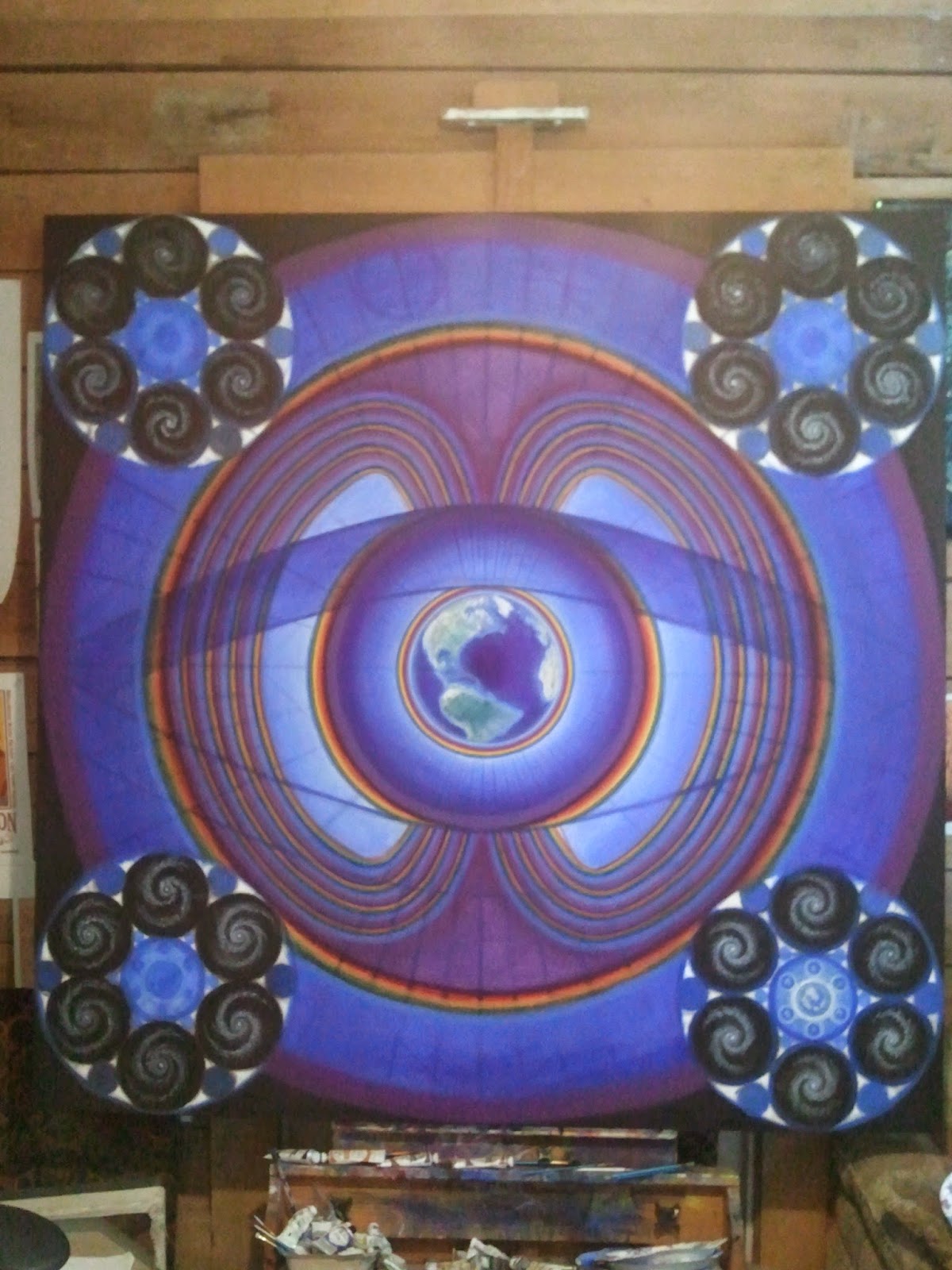 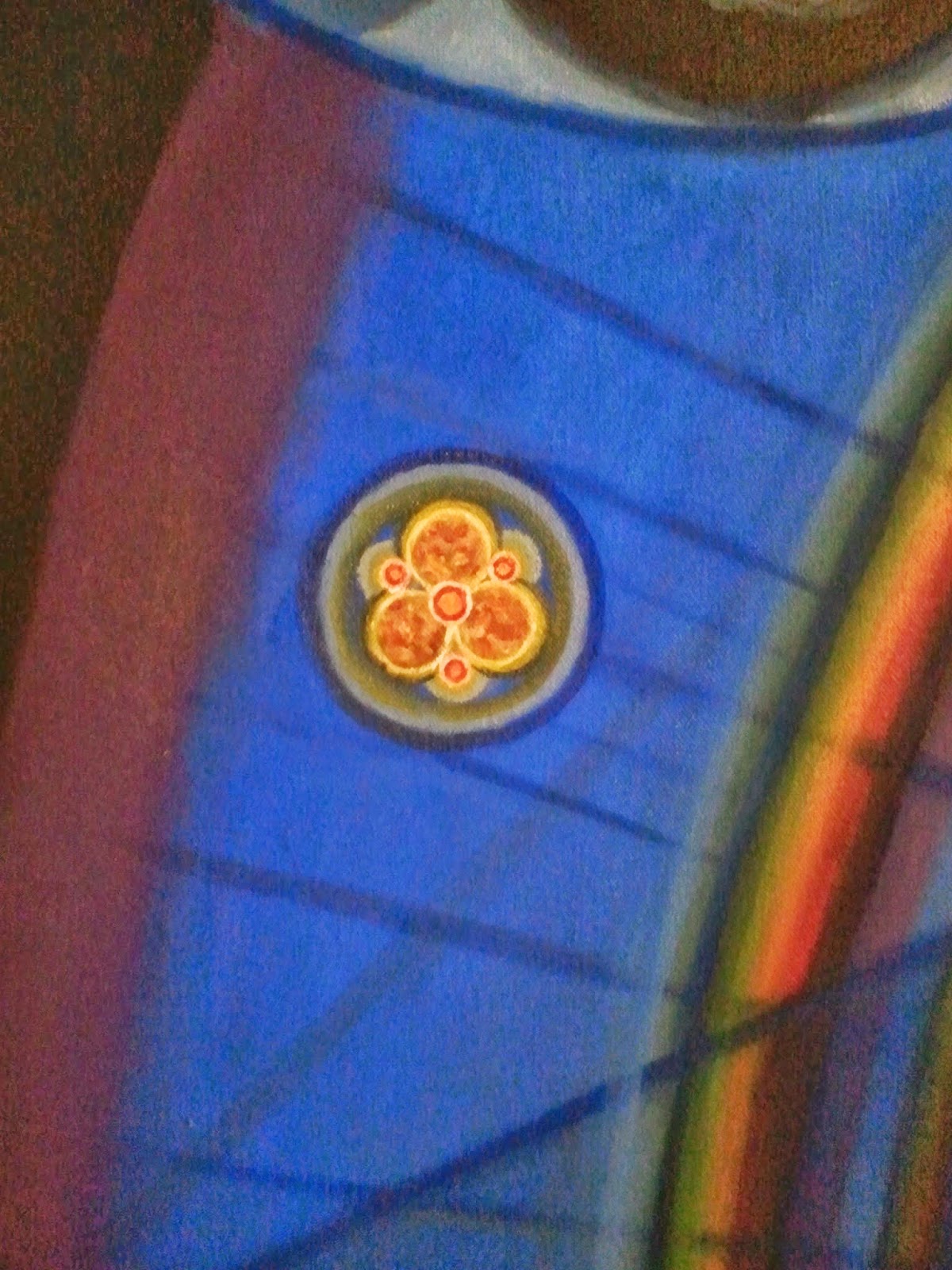 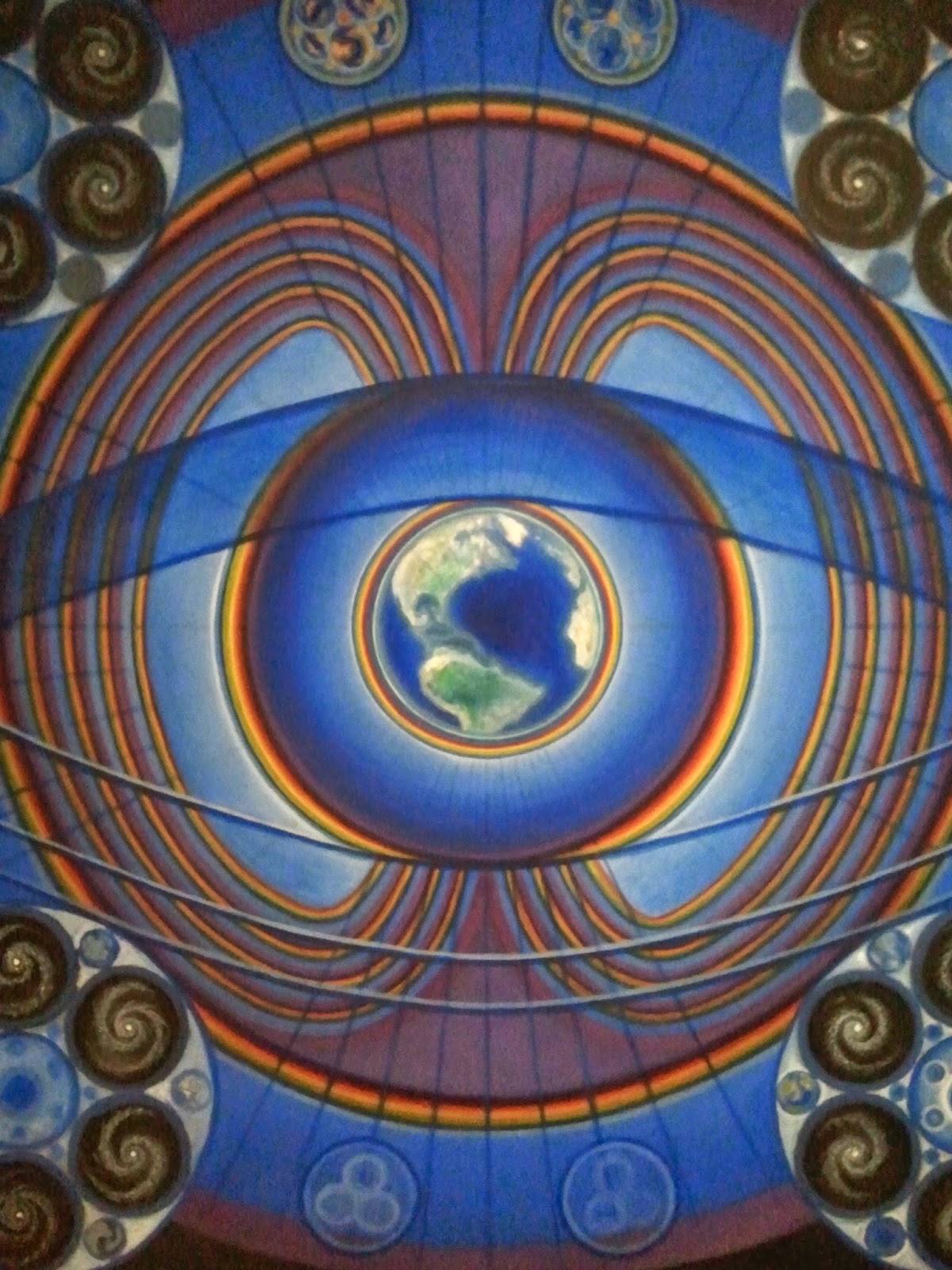 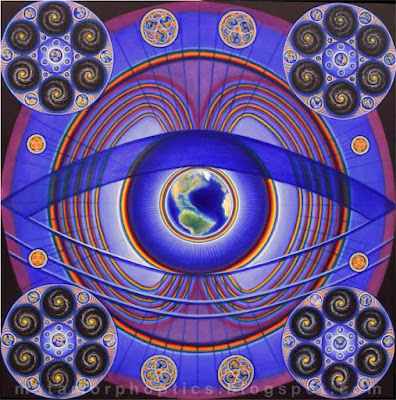 Posted by James Moss at 6:16 PM No comments:

Psymatic Self: Geometries of Consciousness 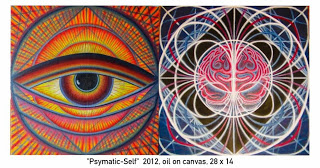 “The individual is an aperture through which the universe becomes aware of itself.” - Alan Watts

“The world is full of vibrations originating in the manifold dynamics of dissipative self organization.” - Erich Jantsch

"Thermodynamics shows us that we have the same entropy-producing function as other naturally occurring matter-cycling systems that grow in regions of available energy. Although life has been identified as, and reduced to, its genetic architecture, its capacity to chemically copy itself, this ability is ultimately secondary to its energetic function." - Dorion Sagan

“The surface of the Earth is the shore of the cosmic ocean. On this shore, we've learned most of what we know. Recently, we've waded a little way out, maybe ankle-deep, and the water seems inviting. Some part of our being knows this is where we came from. We long to return, and we can, because the cosmos is also within us. We're made of star stuff. We are a way for the cosmos to know itself.” - Carl Sagan


This piece is connected to a long interest in exploring the notion of "What is the Self?", mainly in relation to the issue of the mind-brain or subject-object dichotomy, and the intrinsic unity. The Self seems to be a complex unity of both organism and environment, individual and collective, of the transcendent/mystical and immanent/scientific-material, the infinite and the finite, and of energy and matter. In this I wanted to visualize how this apparent duality could be seen or explored symbolically through geometric relationships. 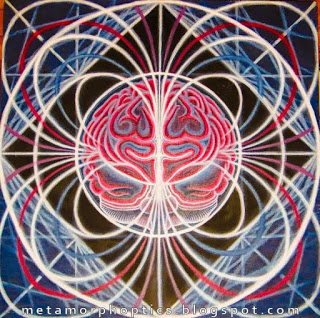 With the piece on the right I'm trying to show how the brain is a processor for energy, matter, and information coming in from an environment outside but inherently and dynamically connected to it, and from four directions, or in four dimensions expanding outward. In a way the brains bio-interactive cyclic feedback loops of various sorts. its various brain wave states, or cymatic-like frequencies of consciousness, create the emergent sense of the central Self, that can also open into expanded states, and to a kind of cosmic identity that reaches out into larger and larger horizons of Self knowledge and awareness of extended environment, and with the universe as a whole. 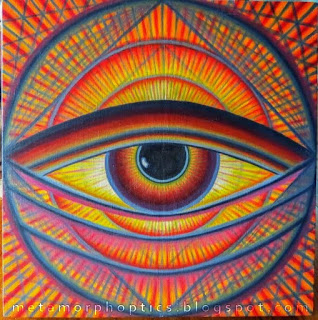 The piece on the left is kind of like the view from the inside of this process, or the intangible interior subjective dimension of an individuals mind, or the "I" in the eye of the beholder.

Posted by James Moss at 2:56 PM No comments: