"What lies beyond the visible world is always imaginary, as a play of images. There is no other way to talk about the invisible in nature, art, and science." Jacob Bronowski

While providing a chance to interact in real time with abstract ideas, Cymatics experiments help show the ways that forms and patterns emerge from fluid and symbiotic interactions, and the ways that transformations of forms or patterns can happen in the natural world.

Working with this visually I want to express a symbolic quality to the fractal and self-similar field-like and vibrational processes that can relate to dual micro-macro and whole/part aspects of morphogenesis, evolution, self-ogranization and development. My intent with the Macrodynamic Morphogenesis series is to show the fractal multi-level embededness and interconnectedness of pattern and form in nature throughout the history of matter/energy complexity; the unifying gestalt or whole/part unity that emerges out of the field interaction of open and natural and living systems. Traditionally this nested order and unity of nature, man, and cosmos was known as the Great Chain of Being, but often with the bad flavor of anthropocentric hierarchical dominance and religious piety at the top, and a misunderstanding of emergent and developmental whole/part hierarchies in nature. More contemporary thinkers like Arthur Koestler along with, Ken Wilber, Rupert Sheldrake, Ralph Abraham, Mark Edwards, and others have used the word "holon", termed by Koestler, to describe something that is both whole and part simultaneously, and mutually embedded in larger and smaller sub-systems or contexts or fields of intricate interaction, or 'holarchies'. This organic stratified stability or nested holonic order is the way nature emerges and builds upon itself through self-organization within various types of environments or fields, or morphic fields.

Nonliving and living systems can both express this holonic nature coupled with the properties of emergent self-organization in phenomena all throughout the universe. It can be seen in 'physical' atomic organization, in molecular domains of nonlinear inorganic chemical oscillations(Belousov-Zhabotinsky reaction), and in the living biological and cellular and ecological domains(Turing-Lorenz), extending into the chaos of the neural and mental domains of cultural information exchange and interior psychological developmental complexity (SpiralDynamics/memes). All open and dynamically evolving systems in both interior and exterior domains have the self-transcendent and fractal like qualities of emergent self-organization and whole/part irreducibility/indeterminacy. In another way, the dynamical systems view of fractal chaos can be said to put bifurcating cracks in the imagined subjective/objective walls that stand between science, nature, and art.
(EROS: Emergence) 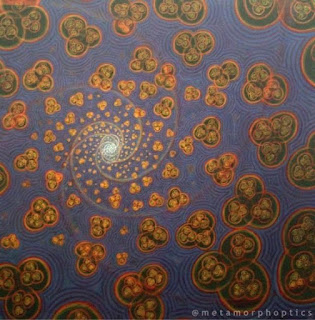 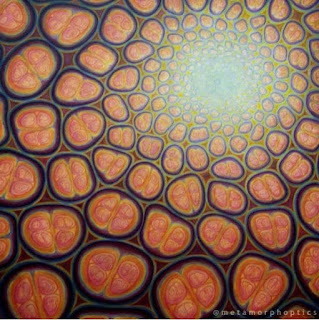 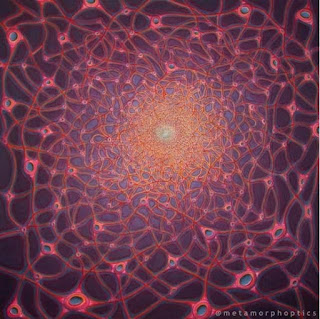 With the notion of a unified macro-sequence or continuum or stream to evolution, in each painting in the Eros: Emergence triptych I am trying to express a relational resonance or field dynamic of the whole/parts coming together into a higher or more expansive whole. This is what the philosopher Alfred North Whitehead, along with the philosophical-psychedelic ethnobotanist Terence Mckenna, have talked about as being a "concrescence point," or a shared density of self-organized complexity, throughout and with the emergence of each domain.

"Creativity is the universal of universals characterizing ultimate matter of fact. It is that ultimate principle by which the many, which are the universe disjunctively, become the one actual occasion, which is the universe conjunctively. It lies in the nature of things that the many enter into complex unity." Alfred North Whitehead

With Mckenna's creative, prolific, and visionary writings and dialogs about this overall macro-process, and in finding some overall unifying nature to evolutionary dynamics, he came to use the Greek words "Eros" and "Logos". Similar to the way both Carl Jung and Ken Wilber used the terms, they express a relatedness between the feminine and masculine principles. In many ways, aspects of these old notions of the Eros and Logos resonate strongly with the new sciences of emergent complexity and the strange attractors of fractal mathematics. With Eros emerging and embracing wider and more connected wholes, and with Logos being a type of multi-dimensional logic or transcendent multi-dimensional attractor space.

A way of thinking about attractors could be that they are really geometrically higher dimensional spaces in the universe. Even the basic dimensionality of the overall universe and the space-time continuum suggests an over all fractal process. Fractal geometry is often referred to as the geometry of the fourth dimension, and unlike the other dimensions, the first, second and third dimensions correlating with the line, plane and solid, the fourth dimension adds the element of time and change, which creates the world we experience. So the cosmos can be seen on the whole as an open system of systems where everything else is related and connected to everything else in a constant change and evolutionary feedback.

This to me visually suggests that a higher dimensional attractor or archetype can be imagined or hinted at through the integrating and complexification of perspective through time. This has been one of the main inspirations for the second triptych series Logos: Attractor, and for me is about the line and the integration of perspectives creating the circle, which leads to the source. 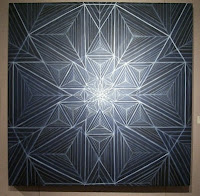 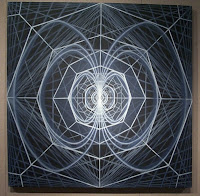 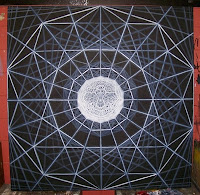 Inspired by the mandala, sacred geometry, and the many mystic visionary artists throughout history going back to the first cave paintings I want to use these paintings as a way of sharing visions and interconnections that go beyond words. I have long admired and respected the work of amazing contemporary visionaries like Alex Grey, Paul Laffoley, Mati Klarwein, Mark Henson, (and many many others considered as "outsider artists" to the art world, which has become too isolated). In particular, like many of these artists, I want to focus consciousness towards a meditative and scientific state of awareness and reflection, aiming to connect with a contemplative space that suggests that both scientific rationality and intuitive spirituality are trying to understand and feel connected to the same primordial Mystery. Albert Einstein's quote about the experience of the mysterious seems most fitting when thinking about this.

"The most beautiful and most profound emotion we can experience is the sensation of the mystical. It is the source of all true science. He to whom this emotion is a stranger, who can no longer wonder and stand rapt in awe, is as good as dead. To know that what is impenetrable to us really exists, manifesting itself as the highest wisdom and the most radiant beauty which our dull faculties can comprehend only in their most primitive forms - this knowledge, this feeling, is at the center of true religiousness." (Albert Einstein)

His understanding of this was a transformation of his personal consciousness that I think helped him understand what can be called a type of ‘rational mysticism’ or 'trans-rational experience'(including rationality). Again, another one of Einsteins quotes on consciousness and the validity of the mystical experience from a scientific perspective.

"A human being is part of a whole, called by us the Universe, a part limited in time and space. He experiences himself, his thoughts and feelings, as something separated from the rest--a kind of optical delusion of his consciousness. This delusion is a kind of prison for us, restricting us to our personal desires and to affection for a few persons nearest us. Our task must be to free ourselves from this prison by widening our circles of compassion to embrace all living creatures and the whole of nature in its beauty." (Albert Einstein)